トップ/TOP/NEWS/Nippon Kayaku conducted Demo-test using its developing PARASAFE®, the emergency parachute system for commercial drone and confirmed the parachute efficacy during sudden drop of a drone

We would like to announce that Nippon Kayaku(HQ: Chiyoda-ku, Tokyo, President: Mr. Atsuhiro Wakumoto) has conducted a demo-test of its developing PARASAFE®︎, the emergency parachute system for commercial drone on October 26,2021 in cooperation with Yabu city(Hyogo prefecture), the National Strategic Special Zone, and confirmed the parachute efficacy during sudden drop of a drone.

【Aim and meaning of conducting this Demo-test】

We conducted this Demo-test in order to confirm the efficacy of parachute system as an emergency safety device during flight in city area and so on where drone uses are anticipated from now on.
If the efficacy of parachute system is proved by this Demo-test, it will bear us ease in drone use, spread of drone will be promoted, and utilizing drone at new industrial area/types will also be promoted. This was also a Demo-test to expand the opportunity of drone use by verifying efficacy of PARASAFE® in protecting human life, loading object and Drone machine itself.

【Program, result and summary of this Demo-test】

①Let the drone take off from the point shown in the chart below and fly at aheight of about 40 meters, to the overhead of descending point in the middle of the ground.

②Intentionally cut off motor power source of drone, hovering at a height of about 40 meters overhead the descending point, and stop the propellers.

④Drone descends with parachute and lands on ground.

⑤Take a photo of the landed drone and evaluate by comparing drones before takeoff and drone after landing. 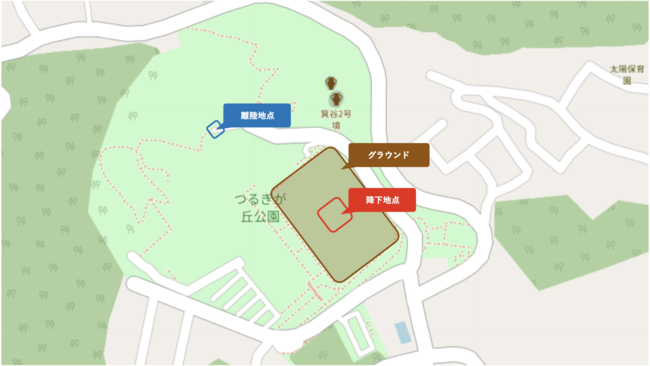 ●Motor and propellers ●Batteries and wiring

Also, as you can confirm from the upper left photo, there was no damage nor distortion even in propellers which can be easily broken and drone was in a reusable state. Also, as you can confirm from the upper right photo, there was no damage to the batteries loaded on the drone.As Lipo-batteries, made of high reactivity material compared to conventional batteries, have high energy density, have possibility of abnormal heating and igniting, but this time there was no abnormal heating nor igniting in Lipo-batteries, as the collision energy to the ground was kept very small by parachute descending.
Also, all wiring parts were not disconnected and we were able to confirm that all wiring parts were at the same condition of pre-takeoff.

The above chart is a graph of altitude data obtained by this Demo-test. The Orange graph is the altitude data obtained this time, and you can see that the altitude variation has easened from the point of opened parachute.
On the contrary, the light blue graph is the theoretical value without parachute use. From two graphs, you can see that without parachute use, drone drops with a speed more than ≧6 times faster than with the use of parachute, and a big shock is given to drone at the time of landing.

【Comments from the people intrested】

We have succeeded all the planned parachuted drone test and obtained data that we were aiming at. Also, we were able to show the parachute to the people who took effort in gathering at the venue of Demo-test, up closely and were able to let them realise that PARASAFE® can make great contribution to the safety of drone utilization. From now on, we would like to test the flight route, flight location, type of drone and malfunction mode with a nearest state to the actual drone service and increase usefulness of drone as a safety device and to be used by many service providers, and would like to contribute to the safety of drone.

Let the drone fly, and assuming failure, stop the motor.Then inject parachute, and descend by parachute. That was the content of the Demo-test, and it was proceeding very smoothly. When the drone was descending with parachute, it was very stable and secure, shock of falling to the ground was low and I think it was very successful as a test.
It is said that in the future, the day of flying cars, including drones, will come, but at the same time, we need to think about the possibility of failure during flight. In case of an emergency, to protect valuable delivery goods as logistics, expensive drone itself and to protect human lives of occupants of flying cars, this will be an absolutely needed technology.
I would like to express my gratitude for conducting the test in Yabu city.In Yabu city, we are proceeding the project of National Strategic Special Zone, and as a part of this project, we feel that this is the first step of tests which obtain big results. Congratulations for the success of the test.

To realize a drone flight beyond eye-sight (Level 4) in manned zone, safe and secure drone is required. We think parachute is one of the effective technologies for safety device in emergency, and it was a precious opportunity for PRODRONE to cooperate in a project for practical use.

“PARASAFE®︎”, the emergency parachute system for commercial drone is a device which makes a drone to descend safely by activating the pyrotechnic remotely and injecting parachute instantly after noticing that the drone is falling. NIPPON KAYAKU globally develops, manufactures and markets Automotive Safety Parts such as inflators for Air Bags and Gas Generators for Seatbelt Pretensioners and develops “PARASAFE®︎”applying the pyrotechnic technology cultivated in this field. We will start marketing “PARASAFE®︎”from December, 2021.
PARASAFE®︎ official site（https://parasafe.jp/）
・Maximum take-off weight：25kg（55lbs）
・External dimension：Φ130×H154mm
・Body weight：1kg（2.20lb）
・Square area of parachute ：12㎡
・Descending speed（Theoretical Value）：5m/s （At the time of hanging 25kg）
・Minimum deployment altitude：30m or more higher

【About the drone used in this Demo-test】 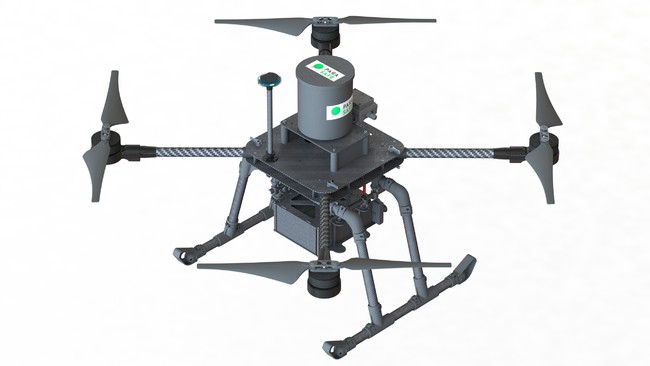 As for Press release, please look at PRTIMES of the following URL

If you have any questions, please do not hesitate to contact us.